Life is What Happens While You Are Trying to Do Science: Mystics' Bay

The scientist who tells you that ghosts don’t exist doesn’t exist.

When it comes to the paranormal, a scientist will more likely tell you, “I wouldn’t know.” But science can be, and often is, conflated with religion. What I mean is that the belief in science as a body of truth is equivalent to religious faith and is just as unscientific. It follows that scientists (and teachers) who rely on their credentials for credibility in an argument are resorting to intimidation. They are casting themselves in the role of priests.

Scientific American describes an encounter between a screenwriter and a scientist from the point of view of the latter in the article “Ghosts, Aliens, Quantum Gravity, Extra Dimensions, Sci-Fi--and the Rules of Science.” The screenwriter wants the scientist to authenticate a speculation by sanctioning the possibility of a scientific impossibility. Says the scientist, “Science certainly is not the static statement of universal laws we all hear about in elementary school. Nor is it a set of arbitrary rules. Science is an evolving body of knowledge. Many of the ideas we are currently in­vestigating will prove to be wrong or incomplete. Scientific descriptions certainly change as we cross the boundaries that circumscribe what we know and venture into more remote territory where we can glimpse hints of the deeper truths beyond.”

Star Trek: Voyager episode “Sacred Ground” describes a similar encounter, albeit a fictional one, from the point of view of scientists whose predictions prove laughably inadequate. The story is a philosophically trenchant thought experiment.

Science functions by observation and measurement. The process works well on things we know how to measure reproducibly and repeatably. But observation alone can be suggestive. Indeed, there are numerous examples of photographs that seem to prove the existence of ghosts. That said, photographs are not measurements because the ability to be photographed is an attribute, not a quantity. It can also be technically undependable. In addition, no one has demonstrated an ability to reliably invoke spectral phenomena.

Let’s get this straight; I don’t believe in ghosts. Belief in the paranormal would be too much of a stretch for someone who sees himself as a rocket scientist. Until recently, I didn’t see, hear, or otherwise come in contact with anything spectral. I still haven’t recognized a ghost in real-time. None of that has kept me from enjoying the film Ghost Busters, or, for that matter, trips to Bisbee, Arizona, and the ghost tours therein. I did take lots of pictures, including the one below, which I like as an out-of-focus, long-exposure photographic sketch of a ghost tour in progress at Opera Drive in Bisbee. The woman with the fascinator top hat and the lantern was our “ghost host,” a mortal. 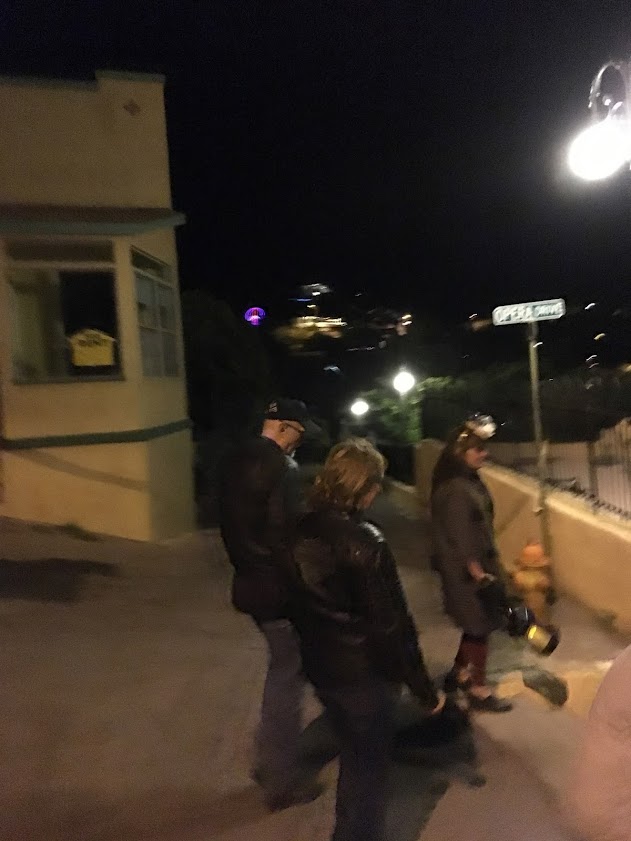 We stayed at the Bisbee Inn, the restored LaMore Hotel on OK Street. It was April, still cold at night in the mile-high former mining town. Our room, 23, the so-called “Cat Room,” named for the supposed ghost cat who haunts it, lies in the corner of the building on the second floor between rooms 12 and 14.

Except for us, the hotel was empty, so I felt perfectly comfortable hanging out on the darkened mezzanine trying to get a photo of the closed doors to rooms 12 and 23 together. I was only able to do it by using the panoramic feature of an iPhone while simultaneously scanning with an LED flashlight. Messy, but the result seemed okay. 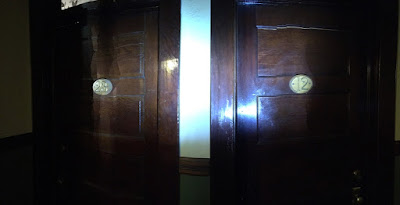 Two weeks later, while examining the shot on a larger screen, I noticed an unintended image. I showed the photo to friends and family with the disinterested demeanor of a Vulcan. They all saw the same thing — the back of a slender woman with long, dark hair (or possibly a black veil) in a white gown, hands behind her back. “It’s someone’s reflection in the door, right?” they asked.

I explained the photograph to a young friend who has tech expertise and science acumen beyond his years. His conclusion: “It’s stitching algorithm error,” he said, proceeding to show me examples of vastly distorted shapes. Maybe so, but the only similar “ghosts” I have seen have been double exposures. To create one, you would need a model for the spirit in question, which I have neither seen nor photographed. It’s not Photoshopped, either, although I admit it looks like it could be. Another possibility I have considered is a “ghost” image resulting from the movement of objects between frames during stitching. The object in question is firmly within the left frame, however. Besides, there were no moving objects in the area except for me, and I don’t look like that.

When we returned to the Bisbee Inn in April of the following year, I examined, with some other explorers on a ghost tour, the surface of the door to Room 23, looking for something, maybe a hologram, embedded in the surface, but we found nothing.

On that same trip to Bisbee, we hooked up with an outfit that had ghost-hunting gear, in particular a hand-held thermal camera and a laser grid pen. Our guide shuttled us around Bisbee in a golf cart. It was dark, cold at 5,000 feet elevation, and, well, spooky. We stopped at the old cemetery, now a park, on Opera Drive. We were instructed in the use of the laser grid (look for curved lines) and viewed each other with the thermal camera. It was low resolution, but bare skin showed up as red, cooler surfaces as green, and the coolest as blue. We were ready.

We visited many sites, heard many sad tales, but I remember just two. We drove up a steep narrow lane to an abandoned house and dismounted. I had been experimenting with the instruments and an iPhone camera, but I never really figured out how to capture an infrared image on the thermal camera. I just used the iPhone with the laser grid, not knowing exactly what to look for and pretty much shivering the whole time. Only later did I notice what I had captured, and even then, I did not understand.

The first photo below I intended merely as an establishing shot. I used the strobe. That’s our guide at the top of the stairs, looking past the garden gate at address 816C, the site of lost love and suicide. 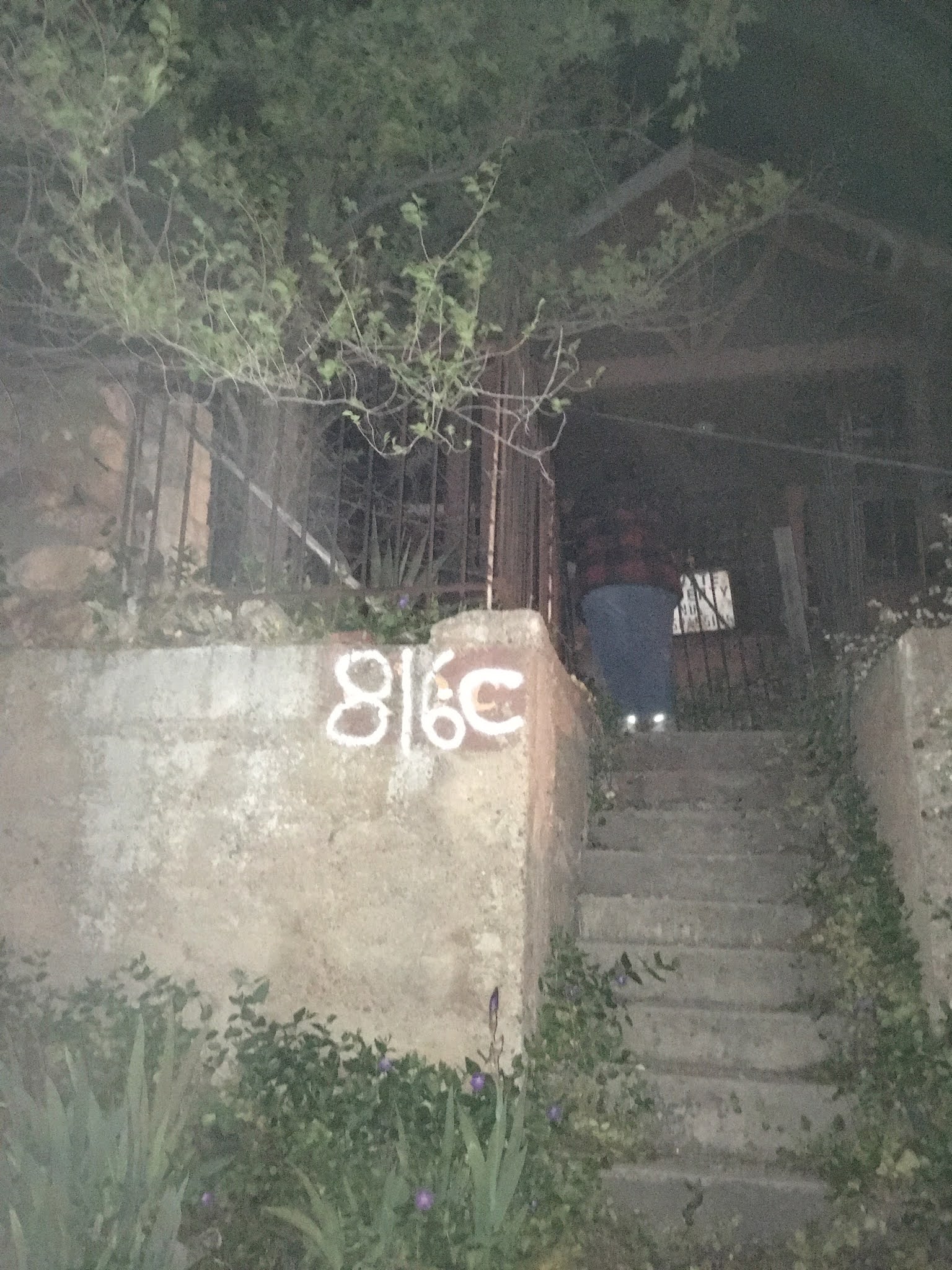 Note the overgrown garden with a mass of small, white flowers to the right of the stairs. Note, too, the fog to the left of the stairs. My daughter, also my apparition consultant, later identified it as an “orb”, which I think of as a more-or-less spherical mass of cold air. I would have ignored it, except for the curved contour lines of phosphorescent green dots on the laser grid in the following photo (no strobe). They say that is evidence of a large orb, an artifact of spirit activity, hanging just off my port bow. 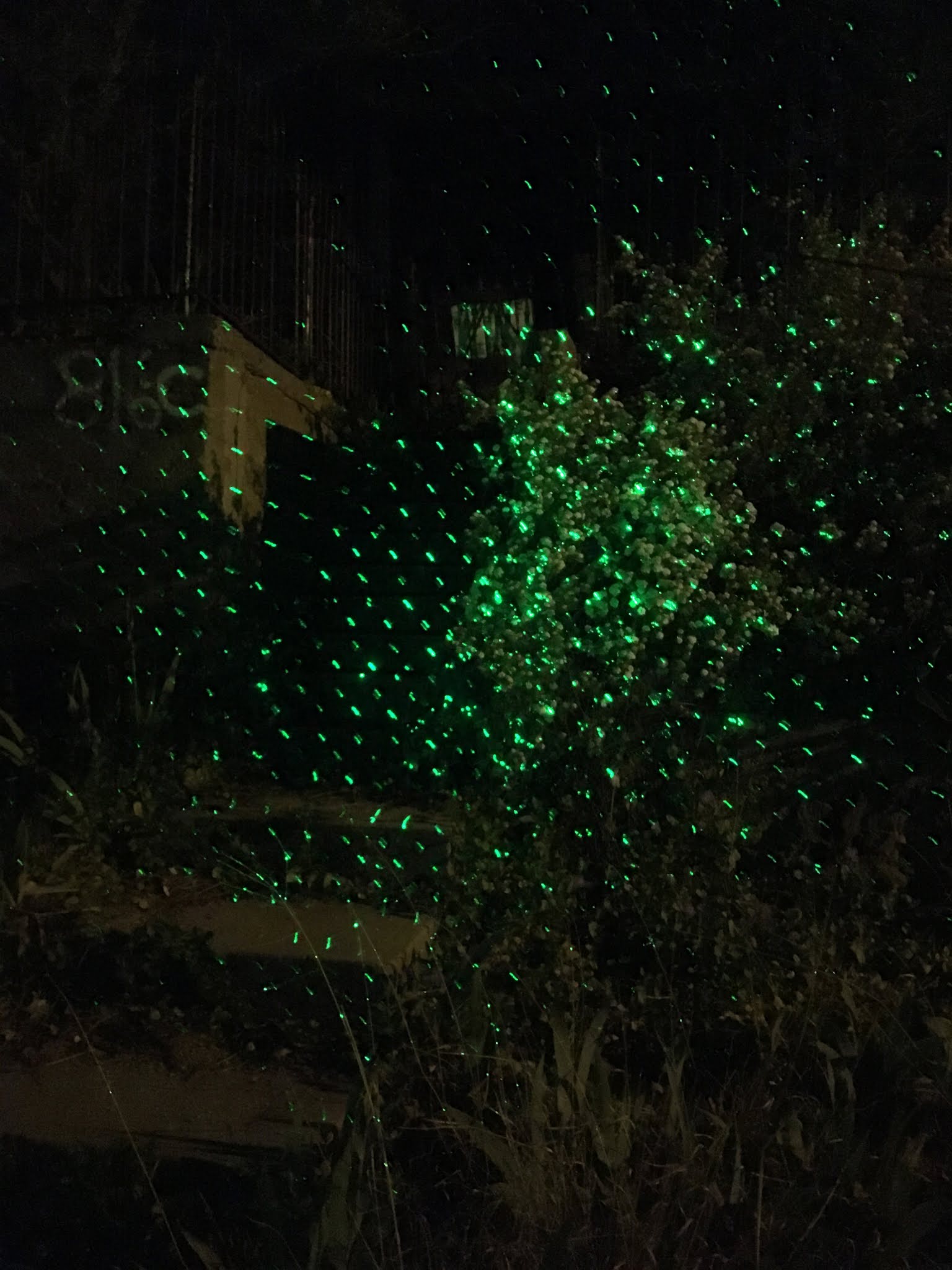 Later on, we approached the rear of a decaying and abandoned hotel on Subway Street, crossed a broken concrete bridge spanning a drainage swale, and arrived at a gated doorway we had originally planned to peek into, but it was open. Lights in hand, we entered. I was carrying what was by then my favorite tool, the thermal camera. We moved cautiously over broken floors until we arrived at what had been a kitchen. En route, we passed new-looking pull-down ladders giving access to what must have been the attic. I decided not to speculate on their purpose. As we exited, we heard movement. The new arrivals were a lightly clad trio, a couple of teenagers and an adult. Our guide inquired if they had permission to be there. I said nothing, perplexed by what was on the thermal camera’s screen. I heard the girl saying how appropriate it was that the last thing she would see before leaving was the hotel. I assumed she meant before leaving Bisbee. They didn’t exactly disappear; they just rounded a corner and were silently gone. I checked the camera against the two mortals with me. They showed body heat as red pixels where you’d expect to see them. What I had seen with the instrument trained on the three interlopers, though, was three blue silhouettes, colder than the green background of the hotel walls.

I have no record of those events, just a memory. I suppose you could say it was all happening in my head. But everything we call “real” is in our heads, all of it sensory input mediated by our brains and registered by bioelectric fields. In principle, you could create an alternative reality by making electrical inputs to the visual, auditory, and other sensory centers of our brains. I learned from my consultant on such matters that spirits can appear indistinguishable from mortals. I will take these experiences under advisement and await more data, but I will not actively seek it. I consider that there is a causal connection between apparitions and the consciousness they cross — no witness, no ghost. Therefore, I posit that there are no ghosts on Mars. Not yet anyway.

Still, where there are sentients, I believe there will always be some kind of mysticism, which is why you will soon see in Alien Landscapes a new section called “Mystics’ Bay.” A real mystic will curate it, and real mystics will populate its shops. It will have its own weird story with its own spooky characters. I hope it will remind me of New Orleans before Hurricane Katrina, only weirder. Better than Halloween. Happy Haunting.

Laurence B. Winn
I run SpaceFarers Corporation, which offers adult play in an immersive off-world simulation and shopping experience that educates the market about terrestrial sustainability products while preparing the world for what comes next. Think of it as a world's fair for the galaxy.